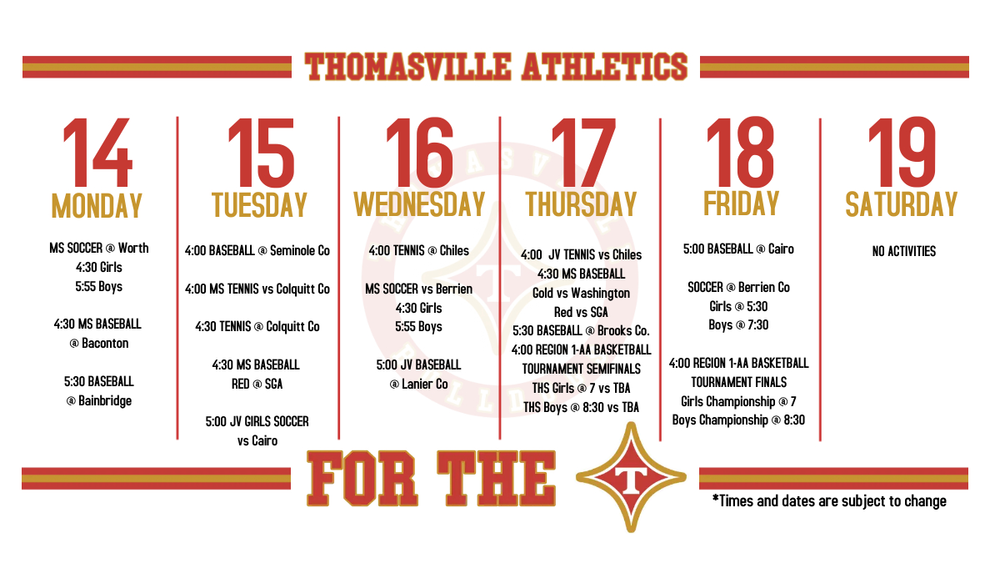 First off I would like to congratulate the Red Hot Dance Line and their coach, Alison Bundrick, on a fabulous performance at the GHSA State Dance Championships. The girls finished the year as High Kick Champions and State Runner-Up overall in the A/AA classification! Way to go Ladies! A big thank you goes out to Ms. Sara Connery for helping to coordinate the send off on Friday.

On Friday night in Blakely the girls and boys basketball teams finished off the regular season with victories over Early County. The girls won 50-49 and improved to 9-1 in region play. Senior Bre Diggs scored her 1000th point in the game.

The boys completed a perfect regular season in region play with a 57-38 victory over Early.

Both teams will be back in action at the Region 1-AA Tournament on Thursday. These games will be in Thomasville. More details to follow.

Congratulations to the boys Soccer team on their 8-0 victory over GMC on Thursday. The boys also battled crosstown rival TCC to a 1-1 tie on Tuesday, scoring with 18 seconds left.

Also on Tuesday across town, the Thomasville Tennis teams began their seasons with both the girls and boys defeating the Yellow Jackets 3-2!

Baseball season is upon us and the Diamond Dogs topped Valdosta 1-0 in a pre-season scrimmage on Wednesday.

Middle School Baseball had a great week with the Gold team defeating Whigham on Tuesday 13-3 and Spring Creek Charter on Wednesday, 16-0. The Red team also defeated Spring Creek by the score of 12-0.