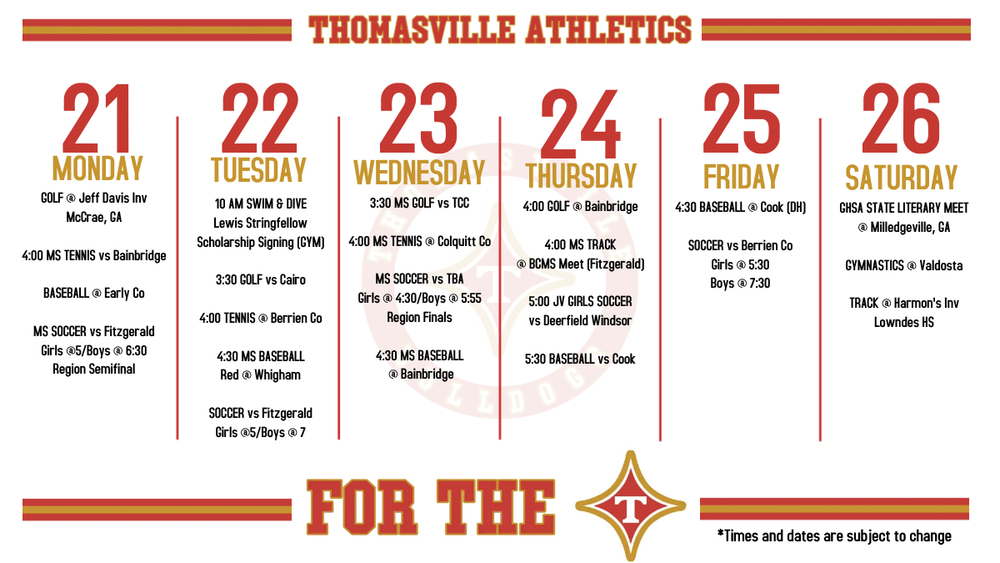 Last week was another one in which the weather played havoc on our athletics schedule. I would like to give a big shout out to Mr. Stonewall Jackson and the transportation department for working with us to get schedules rearranged as games are cancelled or postponed.

Congratulations goes out to both the girls and boys middle school soccer teams, as they captured the regular season region championship on Thursday with wins over Worth County. Both teams will host region semifinal games on Monday at Veterans Memorial Stadium and with wins they will play the Region Championship on Wednesday.

The varsity teams also had good weeks with both teams picking up wins over Brookwood on Monday night. The varsity girls defeated Berrien County on the road in a key region game on Wednesday to improve to 4-1 in the region and currently sit in 2nd place in the region.

The Diamond Dawgs were finally able to get a game in on Thursday vs Early County and came away with a split in the region opening doubleheader. After falling 6-7 in game 1, the Dogs rebounded behind the pitching of Gabe Duncan to win game 2 11-3.

The middle school track team once again had a successful meet on Thursday at Packer Park in Moultrie. The girls team finished in 2nd out of 6 teams, while the boys came away with an impressive 1st place finish, outscoring Colquitt County 145 - 112.50.

I hope everyone has a great week!